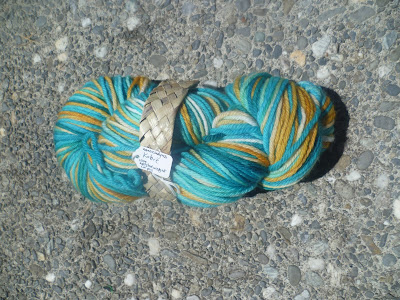 This year my dear friend Cindy has rebooted her indie yarn company nanacindynz and kindly gifted me a skein of 100% Superwash New Zealand Merino worsted to knit with and review.

Cindy themes her products as New Zealand/Aotearoa focused with detailed descriptions of the inspiration of each of her products.

The Kotare yarn I knit with is described as: "Kotare (pronounced Cohr-Tah-Reah - the R is rolled)


The Kotare (New Zealand Kingfisher) used to hang out in the gully next to my house on a branch overhanging the stream, where it would fish for its lunch.
The New Zealand sub-species... is distinguished from the Australian sub-species by its larger size and broader bill and generally by the distinctiveness of its green and blue colours."

I used the yarn to knit a Newborn Vertebrae which I modified by knitting the worsted on 4mm to get a six month size and using an icord edging and therefore called it Icorded Vertebrae on Ravelry. 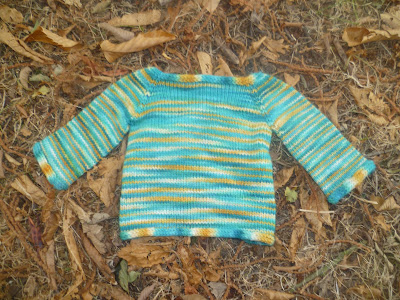 The yarn knit up really well one 4mm needles, soft and squishy but with great stitch definition. I really love the stripy look on little kids and the chunks of colour on the icord caston, edging and bindoff look great too. I will definitely use the icord edging on other kids cardigans, its such a soft and flat finish on stockinette fabric. 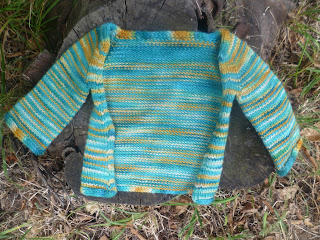 Due to the generous put-up I ended up with 38g left! I thought before I weighed it that it would be a struggle to get the full length sleeves with the 100g. But fortunately Cindy is a very generous dyer. So I've got 57m to make a wee hat or something, yah!

I've washed the finished cardi in prep for the baby and there was no dye leakage. Cindy really knows her stuff, I've got socks from last time she was dyeing who's colour is still very true.

There's nothing better than superwash wool for kids and worsted is even more ideal as it knits up so quickly. There are also lots of great American patterns available for this weight.

I would definitely recommend Cindy's work, so please check out her NanancindyNZ etsy shop and her NanacindyNZ facebook page.

She also dyes sock yarn in superwash merino and bamboo and merino roving for the spinners. There are also gorgeous New Zealand themed stitch markers.
Posted by Celeritas at 11:46 No comments: 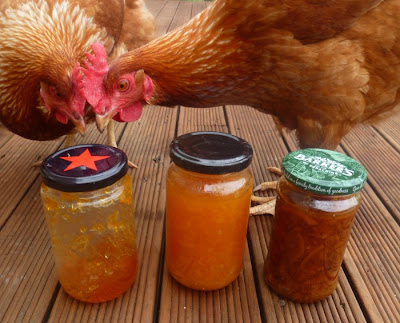 Left for ages as went out etc 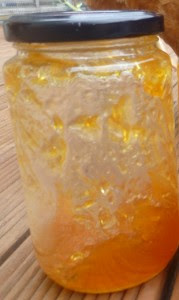 Boil remaining citrus = 1.1kg in 1L of water, reserved bits in muslin bag for 45min as it started sticking

Boiled for 12min at 115 degrees (got to nearly 120 at the end) with minimal stirring, testing every six till set as obvious through leaving in small glass bowl and separating into halves by finger and flaked off a spoon.

Yielded three jars plus 75mL cook's treat of soft, runny and very nice marmalade. I'm not sure its sour enough for my taste but I think I would struggled to set it with less. I think the slices could be thicker and larger but that would be hard to achieve without a larger food processor pipe or the effort to slice it myself.

Boiled for 6min at 105 degrees, burnt bottom and caramelised. Was very brown and seemed lightly jellified so stopped. Definitely sets quicker using all the pectin.

Yielded five jars of tart, runny and slightly caramelised marmalade with large chunks of fruit. I still like it but its an acquired taste as its slightly burned but tart. I think this would have been the perfect recipe with a bit more sugar and unburned! 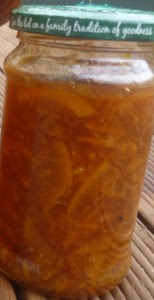 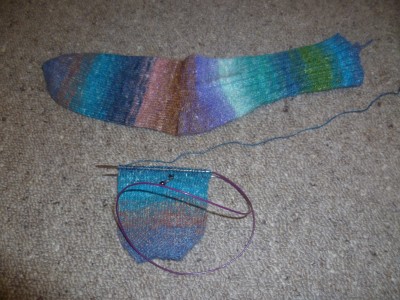 Actual WIPs
Noro Linen Bits (see above) - Most successful socks ever, finished one in ten days, going well on the second.

Nightwatch Lily - Not being sure if it will get much wear by my daughter has put me off knitting it. I hope to finish it before the end of the year but its not a priority in my knitting mind.

Hibernating
4 pairs of Socks - Vinnland are too hard, Hungry Bees pattern is stupid, Twin Rib is boring, Jays are tedious and tricky

Red Twisty Turvy - Will try to get it done before Autumn

Gotland Driftwood - Need to prepare and spin fibre to finish, not on the cards right now

Rock Island - This pattern kills, don't have the time for fancy lace.

Posted by Celeritas at 10:54 No comments: 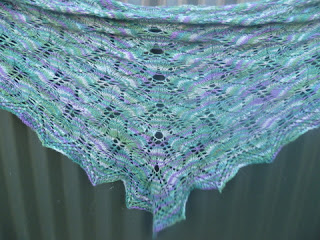 I've finally finished my Gail aka Nightsong shawl in the lovely Grrrl Shape Yarn Silk Merino Sock in Wyrmberg a variegated yarn with silver, green and purple to look like a dragon from Terry Pratchett's The Colour of Magic.

Here's a closeup of the tip which I messed up slightly due to the confusing double yarn over instructions, more details on its Ravelry Page. 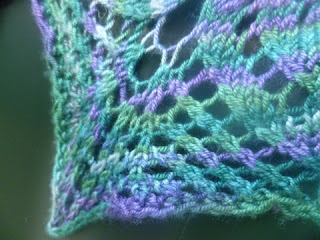 It took me two years and its kind of too big for what I find easy to wrap around me but I'm glad I did it. It also encouraged me to do another shawl which I'm soaring through. 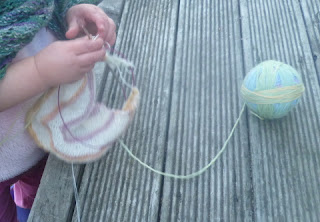 Posted by Celeritas at 21:47 No comments:

I almost had a fail on this jam but I saved it just in time.

Added fruit and 2 cups of water, heated for 45min, adding further 4 cups as it dried out. Mouled and added sugar. Heated for about 15min, didn't check quick enough and almost burned. However succeeded and ended up with one jar of sweet thick fruit spread.

I really enjoyed the hints of lemon I got, next time I will add more.
Posted by Celeritas at 22:06 No comments:

1) 1.5kg of fruit to 4 cups water, strained everything and then added 4 cups of sugar, heated for ages till it jelled, ended up with four jars of soft jelly.


2) 1kg of fruit with no water, separated innards from skins, heated innards and put through moulee and food processed skins. Used 500g of sugar, jelled very quickly after 15 min, resulted in one jar and one tiny jar of very strong jam. Followed the method of The Waitakere Redneck's Kitchen: Grape Jam

3) 1kg of fruit with 1 cup of water, strained everything and then added 2 cups of sugar, set after 15 min and produced one jar and three little jars of nice standard sweet jam.

4) 1kg of fruit with 4 cups of water, strained everything and then added 2 cups of sugar. I added some of the skins in too and it set after 30 min but stuck to the bottom of the pan and got very dark. Made one jar of slightly overcooked, slightly chunky jam.

5) 1kg of fruit, separated innards from skins, heated innards and at the same time softened skins in a cup of water over low heat.  Used 2 cups of sugar, jelled after 15 min. I put half of the skins in the jam and then topped up the jars with the remaining skins. Resulted in two jams of chunky jam. Adapted the method of The Waitakere Redneck's Kitchen: Grape Jam

I'd say that method three was my favourite method, quick, great result and good yield.

Knitting
I've just finished an Autumnal cardigan for my daughter and I'm planning a new cardigan for myself in purple Perendale wool from Skeinz.
Posted by Celeritas at 14:08 2 comments:

in threes: a baby cardigan size 6m, knit with Malabrigo Worsted in Applewood with Buttons for Benji buttons, Ravelry link
Knit with no creativity!
I've recentlty joined a creative Mum's group which I really enjoying attending. However I feel like a bit of a pretender as I don't really consider knitting to a pattern creative. The other Mums are painters, quilters and card makers. They choose what they are going to make, put the bits together in the colours that are pleasing and make it. In knitting I choose the yarn, choose the pattern and follow it. I do a bit of adapting but not in a creative way, just for practicality or to work around problems like gauge.

Whenever I have done psychometrics I end up testing analytical rather than creative. When I think about it something I love about knitting is doing the math for adapting gauge, where to place the decreases and how to use a completely different weight yarn than that intended for a pattern.

But surely doing a craft is creative? It just doesn't feel like it yet. If I was designing new patterns, colour work or stitch patterns I'd feel differently. I don't think I'm a pretender to do attend a creative Mum's group its just that I don't specifically have the creative urge in general. I love to knit but I'm not sure I'm creative in knitting or the other hand based hobbies I do. Analytical Mum, that's more me.
Posted by Celeritas at 14:28 No comments:

Celeritas
I'm a Muslima who loves pretty and unusual things. Come with me for adventures in shopping, stitching and word play. I hope you find some inspiration to incorporate into your personal style.

In my MP3 Player

In my Blog Aggregator